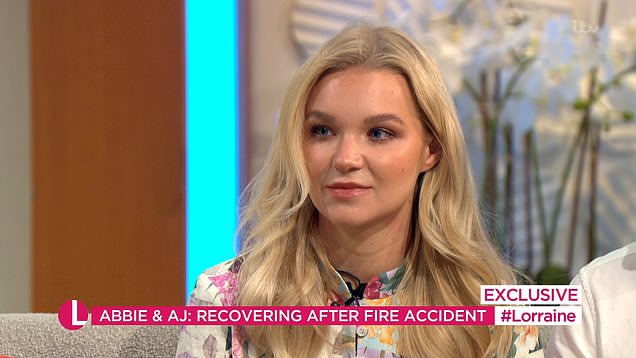 Abbie Quinnen has revealed that she ‘thought she would never recover’ in her first TV interview after suffering from third degree burns in January.

The dancer, 24, was badly injured after she tried to film a life hack which involved cutting a glass bottle in half to become a vase by dipping a rope into a flammable chemical and lighting it.

Abbie had to have three skin grafts amid 20 hospital visits and has now spoken about her experiences on Lorraine.

Appearing alongside boyfriend AJ Pritchard, Abbie told presenter Lorraine Kelly that she initially feared she would never fully recover after the horrific accident.

‘I think when it happened I was just thinking the worst, my face is never going to look the same again,’ she said.

‘[I thought] I was always going to have scars on my body, I’m never going to be able to dance or perform and do what I love doing, so I instantly thought that was it for me. Luckily my face is healing really well.’

Abbie added: ‘I’m doing a lot better than I was, that’s for sure. My face has almost healed now.’

Speaking about how the accident happened, Abbie said: ‘I think AJ wanted to do this life hack, this home hack, what everyone’s been doing, to find something to do [in lockdown].

‘We watched the video straight before we did it, to watch step-by-step and everything and unfortunately it just went horribly wrong. I was stood about four metres away from AJ and it went up, straight away, it went straight across the room and it caught my hair instantly and then unfortunately my body as well, my clothes.’

If you’ve got a celebrity story, video or pictures get in touch with the Metro.co.uk entertainment team by emailing us celebtips@metro.co.uk, calling 020 3615 2145 or by visiting our Submit Stuff page – we’d love to hear from you.