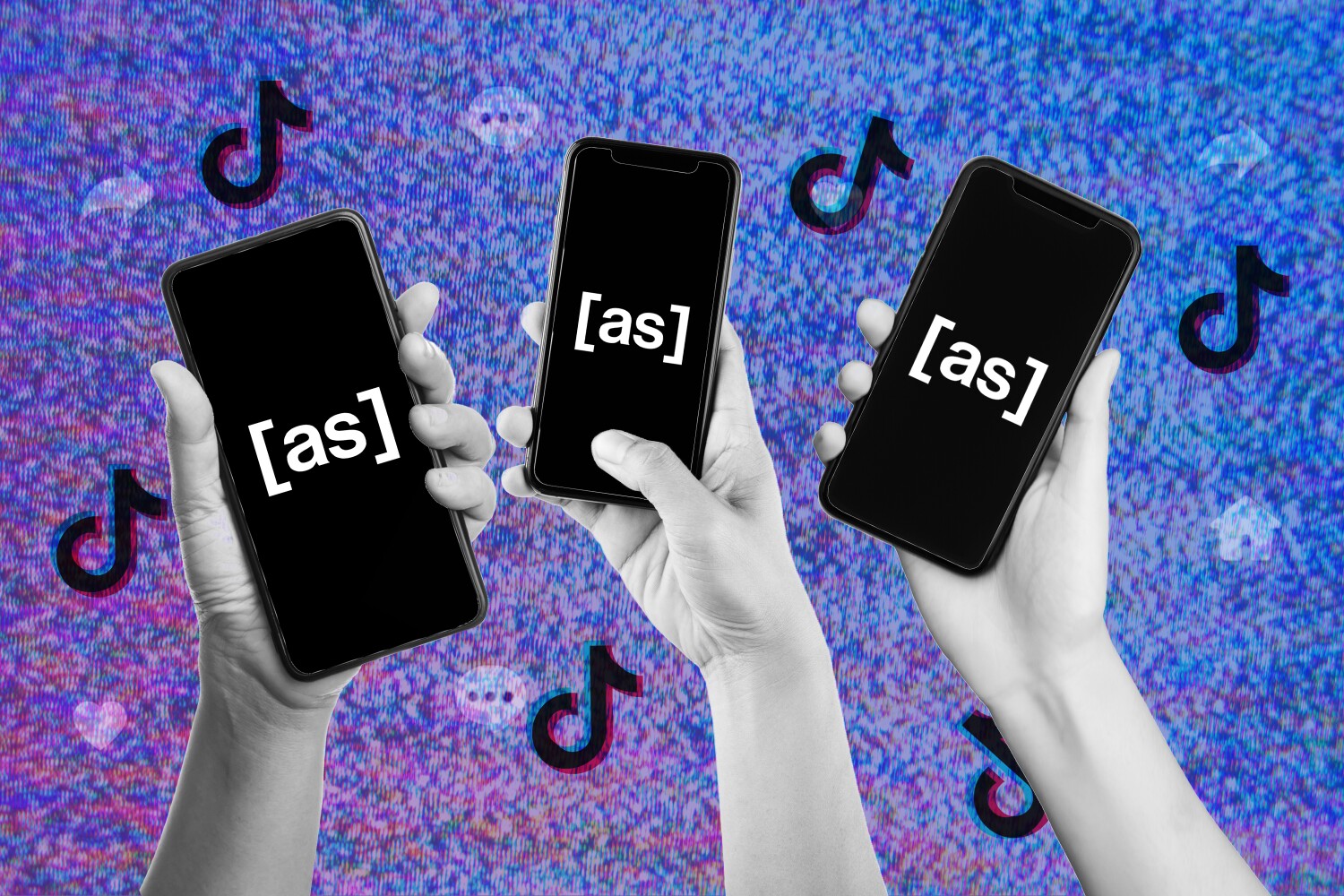 This is another story about a viral internet trend. But this one is different, really.

The Adult Swim trend, which has taken over TikTok this week, is bringing out a side of the platform that has been missing. Instead of just asking users to lip-sync to funny audio or get dressed up for a basic-to-bussin’ transformation, the trend has demanded a more artistic approach.

“We’re having to come up with very creative, unique, one of a kind content, and it’s just so incredible what talent is brought out when something like this is viral,” said Maya Abdallah, a 19-year-old influencer based in Los Angeles. “There hasn’t been a viral trend that actually showed creativity since, I would say, early 2019.”

The TikTok tributes to Adult Swim’s bumps, the short segments that air during commercial breaks on Cartoon Network’s late-night programming, started last month with a post by music producer VANO 3000. First, he created a song by sampling BadBadNotGood’s “Time Moves Slow.” Then he paired the sound with a video of a Spider-Man character actor walking through a New York City subway station, clearly annoyed that he’s being recorded. The result was an aesthetic that could only be described as peak Adult Swim.

VANO 3000 describes himself as “a huge fan of Adult Swim.” The New York-based producer also describes himself as both “timeless” and a millennial. “I’ve got Adult Swim on every night, I keep my TV on Cartoon Network,” he said. He joined TikTok in January, and already has a few other viral videos and beats to his name. Still, the Adult Swim TikToks have taken off in an unexpected way. Sure, the videos are popular, but the talent and creativity on display have revealed new possibilities of form in the app.

“It’s pushing the app to its limits,” VANO 3000 said. “It’s really showing you what TikTok is capable of, and I see a lot of people going to the app just for that trend alone.”

For Cyril Palmer, a 28-year-old Los Angeles-based fashion influencer, the Adult Swim TikToks seemed tailor-made for him. His submission, a stop-motion video that showcases his skateboard and vintage T-shirt collection, has been viewed more than 8 million times.

The response on the app has been overwhelmingly positive, which is a weird thing to say about something on the internet. As one fan of the trend wrote on TikTok, “Y‘all are talented or whatever.”

We asked seven TikTok users to break down their viral Adult Swim videos. In the process they talked about the childhood memories of Adult Swim that inspired them to participate, the mixture of excitement and pressure they felt from getting millions of views and the surprising joy of posting something creative — not just entertaining — and getting waves of positive comments.

“There wasn’t really too much thought behind it,” Palmer said of his initial Adult Swim TikTok. “I kind of just cleaned my room.”

In the stop-motion clip the camera pans over his sheets decorated with the Louis Vuitton logo, his Michael Jackson “Thriller” poster and his extensive collection of skateboards, hats and vintage T-shirts. Palmer’s TikTok also focuses on his collection, which he’s been growing for years. “A lot of people have been asking me a lot of questions about my room,” he said.

In typical artist form, he prefers his second take on the trend over the one that has more than 9 million views.

“I wish I’d come up with that one before the other one,” he said. “But that’s how TikTok works: something will hit and then you’ll make something a little bit better and it won’t do as well. It just all depends on timing.”

Dabash has been doing special-effects makeup for about six years, so she happened to have a set of fake resin teeth just sitting around. She saw them sitting on the table and thought, “‘OK, what can I do for this trend?’” she said.

“The first thing that popped into my mind was ‘OK, put it in your mouth and spit it out,’” she said. “And it was just so weird.”

She put a trigger warning on her video, but some were still spooked by her gruesome take on the trend. “Over 130 million Americans can’t afford to go to a dentist,” reads the caption as Dabash holds a pair of pliers. “Who cares. Do it yourself.” She then spits out a (fake) tooth and a mouthful of (also fake) blood.

“That’s kind of how the bumps were, they were very brutal,” she said.

Justin Yang, an 18-year-old from Tampa who plans to study neuroscience at the University of Miami this fall, was inspired by stress and exhaustion — he made his trend video while studying for his Advanced Placement tests. In the clip, which has been played more than 12 million times since Friday, viewers can see an anxiety-inducing stack of test prep books (for AP Chemistry, Biology, Calculus and Statistics). As he lowers his head, the Adult Swim logo appears in a cluster of sticky notes. “I made this instead of actually studying,” reads his caption.

“I didn’t really expect anything from it,” he said. “I posted it, and I was like, ‘Hey, I contributed something to this trend, hopefully a couple of people will see it and like it.’”

A bigger following, however, comes with added responsibilities. “I view my account in a whole new way now,” he said. “I have to take into account this new, larger audience I have, and it’s very stressful and overwhelming. It really is.” For now, he’s not going to reinvent the wheel — he plans to stick with his focus on studying and college life.

“It’s overwhelming, but also exciting at the same time,” he said.

At first, Abdallah didn’t think she’d participate in the trend — it seemed like everything had been done — but the next morning she filmed a video inspired by the familiar agony of finishing assignments for summer school. For the final shot, she duct-taped her phone to the ceiling, sans case, to film an overhead shot of the Adult Swim logo popping out of a printer.

“On the very last take, right before I filmed it, it fell and my phone smashed on the ground,” she said. “It was so funny.” (The phone is fine.)

“Anything for the angles,” she joked. “I’m dedicated to this influencer lifestyle.”

Abdallah filmed the video from her parent’s house in Atlanta, where she’s visiting. Two months ago she moved to Los Angeles to pursue a career as an influencer. Much of her past content consists of skits and videos describing what it’s like to be a first generation Arab American.

For Abdallah, the trend brought back memories of pretending to sleep so she could stay up late to watch episodes of “Family Guy.” But it also reminded her of a simpler time on the app. While she’s grateful for the platform TikTok offers, she said she and her creator friends have felt burned out. With the Adult Swim trend, many creators felt like they weren’t just entertaining, but getting a chance to showcase their creativity, she said.

“This has been the happiest we’ve been to make content in a while,” she said.

A few days ago Deborah Kong, a 19-year-old rising junior at Barnard College in New York, posted a video poking fun at herself for being a corporate intern and economics major who, actually, wants to be an influencer. The next day she went viral with her Adult Swim trend video. “That’s manifesting to me,” she said.

“Stop caring so much about how you look,” Kong advises in her video, which has been viewed more than 1 million times, as she puts on makeup. “Literally no one else notices your insecurities. Also, life is probably a simulation anyway.”

At the end of the clip Kong leans into the camera and looks down, revealing the Adult Swim logo written in the folds of her eyelids.

“Since I have Asian eyelids, they can hide words or messages or designs,” Kong said. “Growing up, that was actually always a big insecurity for me, which is why I wanted to incorporate that message about stop caring about what other people think.”

“Don’t wait for things that will never happen,” reads the caption over a video of a young woman anxiously waiting for the Gold Line train at the South Pasadena station. “Time will pass. Everything does.” The video ends with a Gold Line train passing by with “[adult swim]” on the side.

The comments section was a mixture of praise and people speculating on what kind of hookup Torres, a 20-year-old Los Angeles-based filmmaker, has with the LA Metro. He spent two and half hours editing the logo onto old b-roll footage.

Torres said he remembered watching Cartoon Network during his formative years and experiencing the noticeable transition to Adult Swim. “For me, when I was young, it was very ambiguous,” he said. “And I just kind of took that feeling and I tried to incorporate it when I was making this video.”

It was only a matter of time before someone got an Adult Swim tattoo, so Drawbaugh, a photographer and nursing home dietary aide from Westminster, Md., rushed to post hers. The caption read: “nothing in life is permanent … well, maybe not nothing.”

While the “[as]” tattoo in the video is a sharpie outline, Drawbaugh confirmed the real one took about 20 minutes. For the last year and half she’s been giving herself simple tattoos by hand. “My first stick-and-poke ever was just Jack Black, just his name, so I felt like there was no really going back from there,” she said. “I don’t really mind what I do on my body.”

There is also a personal connection. Drawbaugh remembers spending weekends at her dad’s house when she was 8 or 9 years old and waking up around 3 a.m. to the sound of Adult Swim bumps as her father got ready for work. He’d tell her to go back to sleep, but she’d insist on staying up to watch “Family Guy” or “Robot Chicken.” “He would always let me stay up and watch an episode or something until I fell asleep,” she said. The tattoo is a reminder of that time with her father, who died her senior year of high school.

“Seeing the trend, it kind of brought back those memories,” she said.

‘The Bachelorette’ Recap: Katie Thurston’s Men Return to Tell All

Scalpers are already trying to sell Steam Deck reservations for over...