For those that don’t know, Joe plays the character John Ross on the new series. He is the husband of Mare’s best friend Lori.

Three episodes of the series have aired so far and Sara took to her Instagram Stories to rave about the show, which is getting great reviews from both fans and critics.

“Joe – I am legitimately obsessed with Mare of Easttown on HBO and I don’t care who *knows it (*said with the DelCo ‘O’),” Sara wrote in the post. 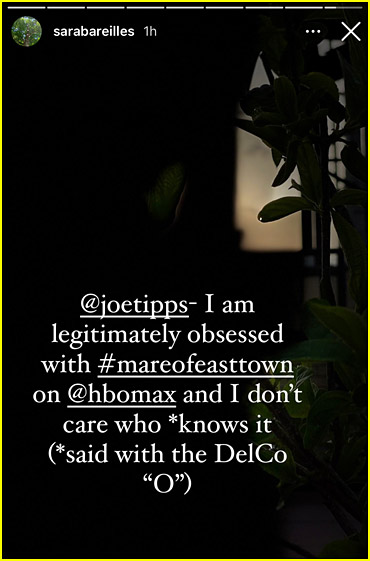 Mare of Easttown is about a detective (Kate Winslet) in a small Pennsylvania town who investigates a local murder while trying to keep her life from falling apart. The show airs on Sunday nights on HBO and HBO Max.

You might also recognize Joe from his roles on the NBC series Rise, the Hulu limited series The Act, the Apple TV+ series The Morning Show, and the Lifetime movie Patsy & Loretta.

Oscar Commercials Sold Out at ABC