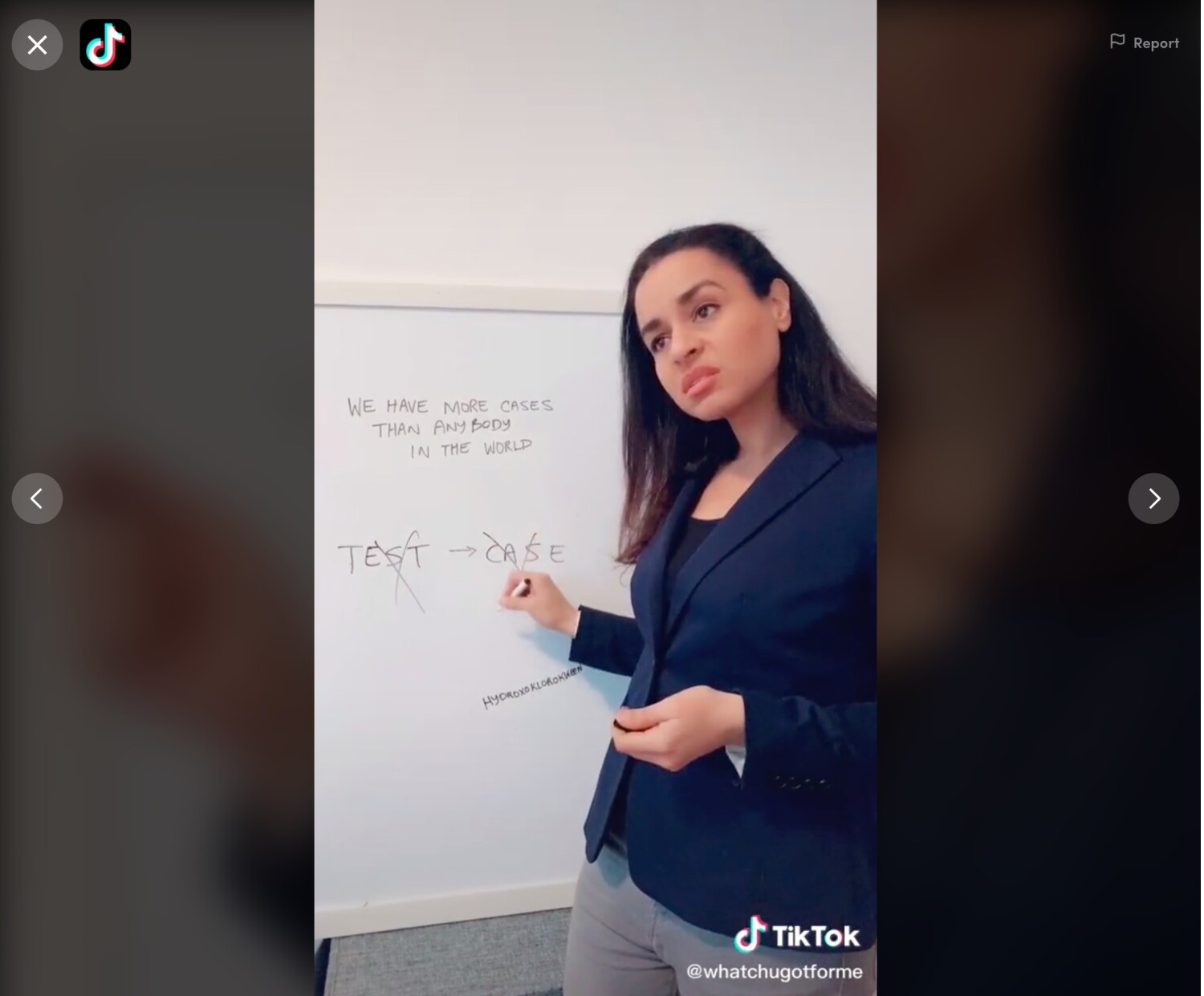 Within hours of President Trump’s vow to ban the video app TikTok in the U.S, one of TikTok’s most recognizable faces took to the platform to mock the chief of state’s intentions.

Sarah Cooper, a comedian who rose to fame this year lip-syncing Trump’s words in TikTok videos, posted a clip Friday impersonating the president while he discussed the app. Just before boarding a helicopter — the noise of its blades threatening to drown him out — Trump told reporters: “We’re looking at TikTok. We may be banning TikTok, we may be doing some other things, there are a couple of options. But a lot of things are happening, so we’ll see what happens. But we are looking at a lot of alternatives with respect to TikTok.”

Cooper’s take on the clip included a fan blowing her hair back for dramatic effect.

Aboard Air Force One on Friday night, Trump doubled down on his threat, telling reporters a TikTok ban was fast approaching and would be imposed by executive order or emergency economic powers.

TikTok, whose primary user base is Generation Z, is owned by the Chinese company ByteDance. Earlier this month, the president told Greta Van Susteren that he was considering blocking the app from operating in the U.S. as a form of retaliation against China because of “what they’ve done to this country and to the entire world” in regards to the coronavirus.

Secretary of State Michael R. Pompeo has said that TikTok is a national security threat that exposes users’ data, though no proof has been offered showing such supposed breaches have been used against the U.S. TikTok responded to the claims by insisting in a statement that it had “never provided user data to the Chinese government, nor would we do so if asked.”

Cooper, meanwhile, has become one of the app’s biggest draws. The 42-year-old saw her videos go viral this spring in the midst of the pandemic.

“People are having a good laugh when it’s really hard to laugh,” she told The Times in June.”Trump is an amazing comedy writer without realizing it. There were so many moments I was able to use. I put the video out within a few hours of him saying those words. A lot of people said they saw the parody before they saw the real thing, which made it not only good content but newsworthy.”

In a review of her satire for The Times, theater critic Charles McNulty called Cooper “a postmodernist with a satiric slyness and a genius for editing” whose “timing is uncanny” as she “italicizes with her expressions the variations in his wobbling.”

Cooper said she views her TikTok videos as a way to force viewers to reckon with — or fact-check — some of the president’s most outlandish statements.

“It seems like we’ve been gaslighted for 3½ years,” she said. “Now he’s saying ridiculous things that make no sense, but people are nodding and no one is calling him out. That frustration is part of the reason why I wanted to do something like this.”

Why So Many People Think Faith Hill, Tim McGraw Are Divorcing

Wiley dropped by his management over anti-Semitic tweets – Music News

Chris Meloni on Returning to ‘Law and Order’ as Elliot Stabler