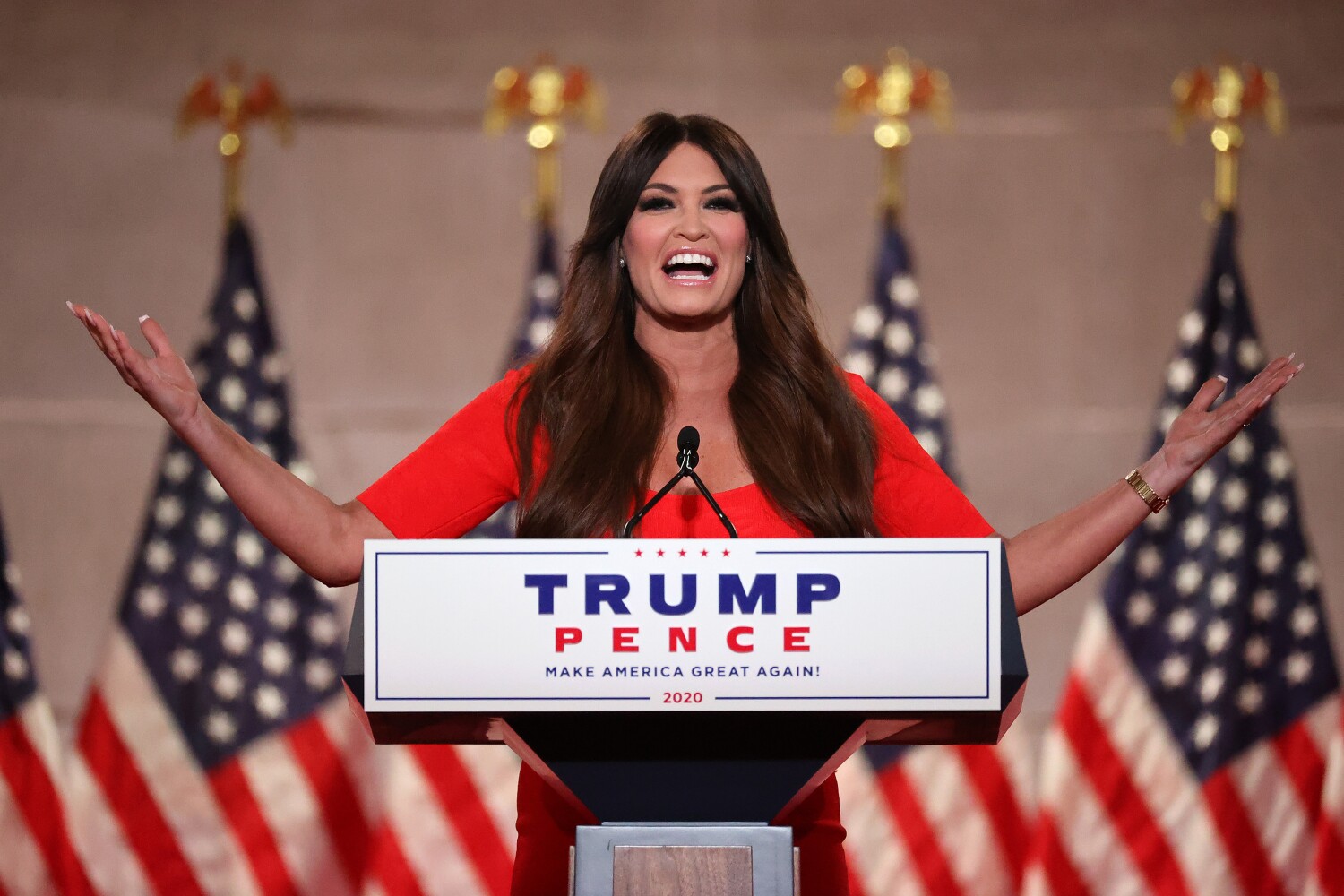 Throwing a virtual convention is no easy task, but the first night of the Republican National Convention failed so miserably it felt like a monotonous road trip with the parents, when you were 7, and they controlled the radio.

With the country’s odometer ticking toward the four-year mark, speaker after speaker promised America was headed to someplace wonderful as long as President Trump remained in charge.

Like indistinguishable sign posts, they each gave speeches on the same stage, in front of the same flags, from the same podium, above the same 2016 slogan: “Make America Great Again!”

Are we there yet? How about now? When exactly will we arrive at Great, and will there be clean bathrooms there?

The Republican National Convention kicked off Monday night with a sputter rather than a bang, despite the preponderance of gun advocates who spoke in support of the president during the two-hour telecast, most of which was produced at the Charlotte Convention Center in Charlotte, N.C., and the Andrew W. Mellon Auditorium in Washington, D.C.

Like the Democrats before them, it’s now the Republicans’ turn to throw a rousing four-day event during the COVID-19 pandemic, or “the China virus” as Trump called it, unable to stop the xenophobic bile even for one night, despite celebrating his and Vice President Mike Pence’s official re-nomination to the top of the GOP ticket.

Unlike the Democrats’ event last week to nominate former Vice President Joe Biden and Sen. Kamala Harris, the first night of the Republican convention was rudimentary, mostly pre-taped and largely white. In their hands, the roll call vote, which was one of the DNC’s most entertaining interludes, was a fairly static event, and over long before prime time. It came closer to a homeroom chore than a celebration: One by one they joylessly read the numbers.

The flat, predictable nature of the Republicans’ stage show was surprising given that it was dedicated to a reelecting a president who prides himself on bucking expectations, not to mention protocol and facts.

Featured speaker Nikki Haley, the former United Nations ambassador, appeared stiffer and less convincing than Julia Louis-Dreyfus during the actress’ stint as host during at the DNC’s event last week. (Perhaps that was because Haley was one of the few tasked with speaking to Trump’s character.)

Donald Trump Jr. was glassy-eyed and relatively listless, even while delivering the kind of divisive rhetoric — radical Democrats support Islamic terror, closing churches, eating children, etc. — that he and Trump’s base usually find motivational. But his girlfriend, former Fox personality Kimberly Guilfoyle, succeeded in jolting viewers awake with her testimonial — largely because she shouted her entire speech. It was as if she was trying to make up for the lack of enthusiasm with sheer volume.

In lieu of a new rallying cry, the GOP appealed to its base Monday by mining the same “Us vs. Them” divisions that served Trump so well in 2016. Back then, the Washington establishment complained bitterly about his openly offensive and biased remarks on the campaign trail. Now, stoking intolerance and fear is the strategy.

Mark and Patricia McCloskey, the St. Louis couple who are facing criminal charges for pointing guns at unarmed, peaceful protesters outside their home earlier this year, represented one of the few interviews piped in from beyond the podium. The couple warned that the Democrats are out to destroy the suburbs: “What you saw happen to us could just as easily happen to any of you who are watching from quiet neighborhoods around our country, and that’s what we want to speak to you about tonight,” Patricia McCloskey said.

And the center of gravity for all this grievance was Trump, to the point that praising the president superseded developing, much less selling, new Republican ideals, policies or values.

Trump spoke a few times during the broadcast from the White House, traditionally considered off limits for a partisan political event like the quadrennial conventions. In one such moment he stood before cameras flanked by front-line workers. Through them, he addressed Postal Service workers, truckers, police officers and nurses by proxy, using them to defend against criticism he’d received over his handling of COVID-19, the #BlackLivesMatter movement or the crisis at the USPS. And because he can’t let it go, he touted hydroxychloroquine again.

It’s yet to be seen if the Republicans will improve the production values, enthusiasm levels or branding strategy over the remaining three nights of the convention. But the RNC’s opening gambit was an incredibly clumsy performance for a former reality TV star who ranks much of his success, and the success of those around him, by their ability to get ratings.

Such a dull ride on the road to (supposed) greatness.

Joey King’s Hair in ‘The Kissing Booth 2′ Is Actually a...