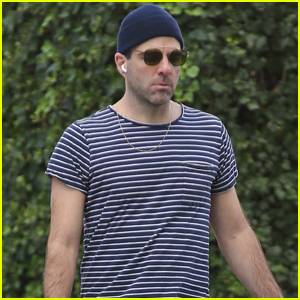 Zachary Quinto is getting in some fresh air!

PHOTOS: Check out the latest pics of Zachary Quinto

For his walk, Zachary kept things cool and casual in navy and white striped shirt paired with jeans, sandals, and a navy knit cap.

Zachary‘s latest outing comes several weeks after he joined tons of famous friends at the NYC premiere of The Eyes of Tammy Faye.

Earlier this year, it announced that Zachary will be teaming up with Jacob Elordi for a new crime-themed thriller movie, based on a true story! Get the scoop here.

FYI: Zachary Quinto is wearing a pair of Birkenstock sandals.

Whitney Houston x Clean Bandit’s ‘How Will I Know’ Video

Alec Baldwin Fatal Shooting On Movie Set Could Have Been Filmed,...